Marina is an avid fabric lover (it gives her goose bumps!) and is thrilled to be part of the, "Changing the Tide...one ripple at a time”, project. To have the privilege to create beauty and make a difference one stitch at a time is indeed a blessing.  Read more

She would also like to thank her husband Doug for his ongoing generosity and support to enable her to contribute. 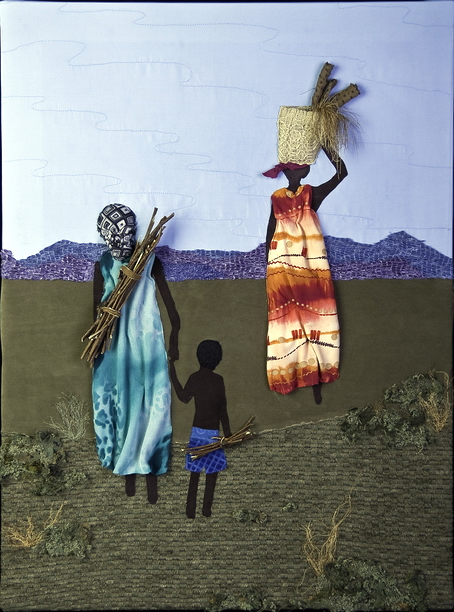 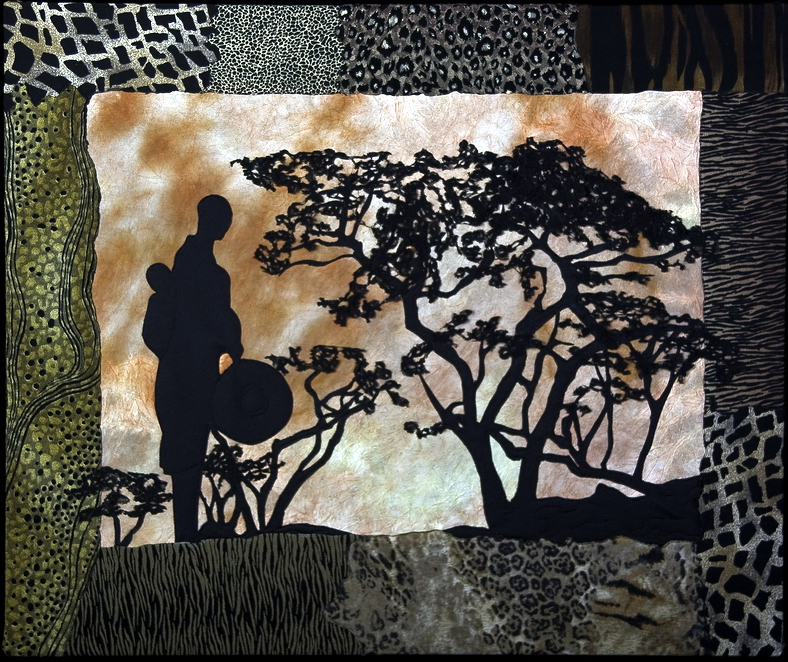 In 1996, Myrtle and her husband retired and moved from Lethbridge to Victoria-- a long time dream of theirs. However, they always went back to their cabin in Alberta for the summers where they golfed and made crafts.   Read more

One year, her husband built a playhouse for the grandchildren--a replica of a one-room schoolhouse with a steeple, bell, school desks and chalkboard. Myrtle opened a little craft shop in the schoolhouse where she made craft items of all kinds and met interesting visitors from far and wide. She was in heaven! Crafts have been her passion all her life.

It was in 2005, when she returned to University, and took two Anthropology courses, that her eyes were opened to the devastation caused by HIV/AIDS in Africa and to the millions of orphans being raised by their grandmothers.

It was Myrtle's destiny to join the Victoria Grandmothers for Africa and to become involved with textile art, making fabric art cards and wall hangings. Through the Stephen Lewis Foundation, Myrtle, with her fabric artwork, is able to help support those African grandmothers who are raising orphaned children

Gayle has sewn from a very young age and took up quilting when she retired and moved to Comox in the year 2000.   Read more

For, perhaps, the first five years, she stuck with what would be considered traditional quilting with blocks and appliqué. As she explored different techniques and took classes from inspiring teachers, she found her focus changed.

She was inspired to create her own fabric through paint and dye. A workshop utilizing puffy paint, tyvek, potato chip bags and lace pushed the possibilities even further.

She feels fortunate to belong to a group of like-minded artists/quilters who provide support and inspiration for each other. 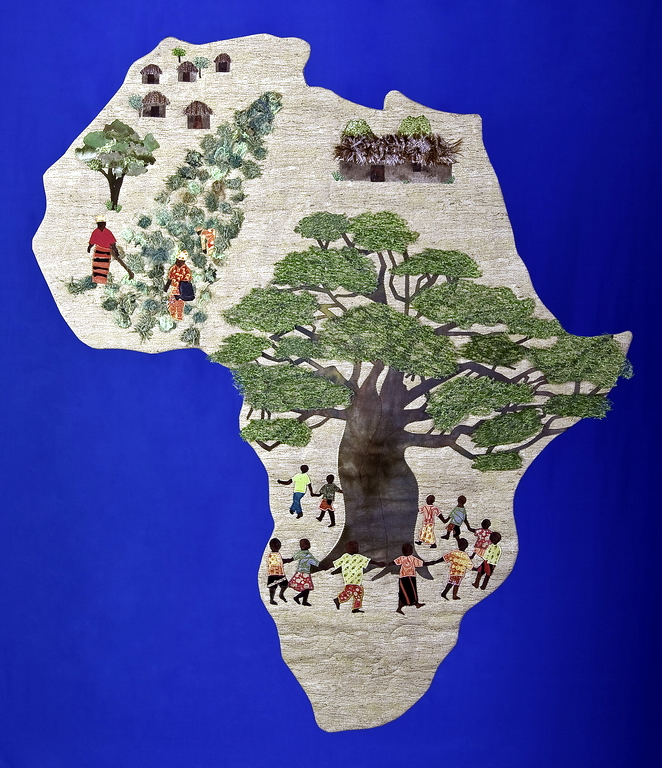 Phaedon has been an oil and watercolour artist for many years, working mostly on commission.

She is a recent devotee of the fabric arts and enjoys working with fabric immensely.   Read more

The family, in “Circle”, was very excited that she wanted to take pictures of their herd and their family. The father, at one point, actually staged herding the sheep so that she could get an action shot.

She felt incredibly honoured when the family allowed her to hold their little daughter.

Marilyn's sewing life began, at about the age of five, on her mother's old treadle sewing machine where she learned to sew clothes for her dolls. Later, she did many types of sewing including quilting.   Read more

Painting and drawing have also been major hobbies for her.

Fiber art is a new art form for Marilyn and she has found it to be an exciting outlet for her artistic expression - combining her love of fabric and sewing with the freedom of painting. 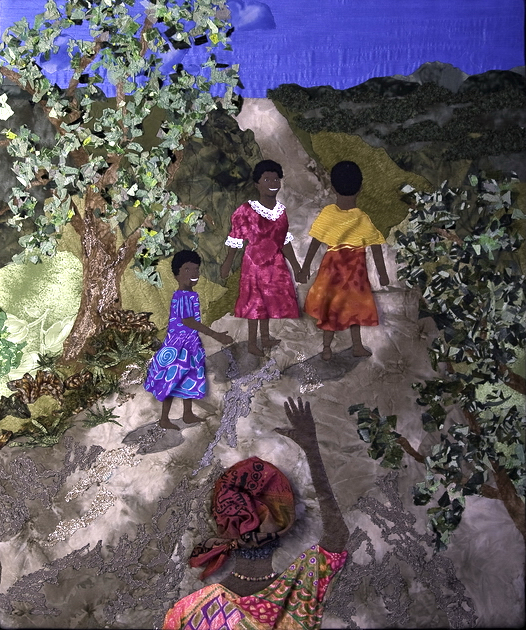 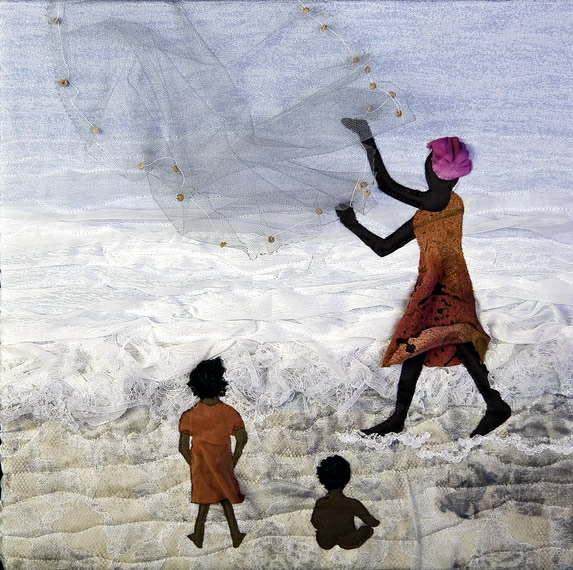 Pat Williams is a lapsed calligrapher and wannabe painter, a lover of arts in general and a believer in their many benefits, but, with the "Turning the Tide...one ripple at a time" project, finds herself newly amazed at just how far-reaching those benefits can be.   Read more

What wasn't natural was for a calligrapher, whose usual tools are pen, ink and paper, to be hard at work with fabric, needle, thread, and a sewing machine. She found it was a challenge to use new materials and techniques, and, oh, so much fun. The Internet provided the explanation and the lovely little diagrams that gave her the artistic inspiration.

Once she made the decision to focus on the virus itself, it seemed logical to place it in its bloody environment. 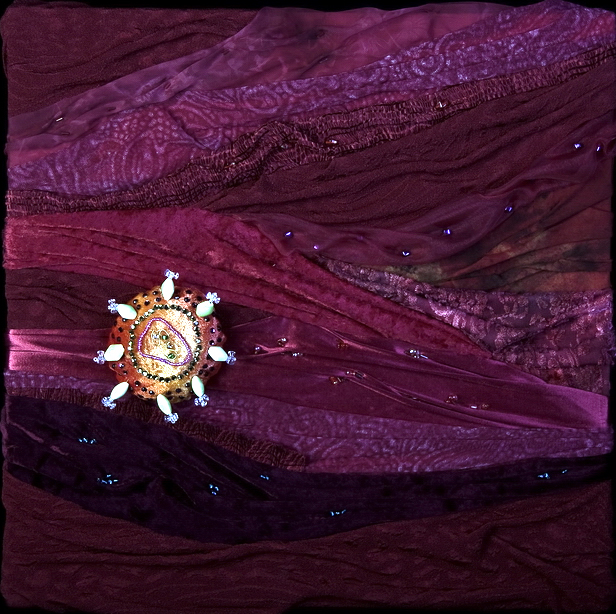